Project archives for everything aged, abandoned, and otherwise gone.

This project has since been absorbed into Washington Civil Rights Association.

Angsty solo tracks written from high-school into my early 20's. The music is ok, but the lyrics leave plenty to be desired.

PxJM - Police vs. the Japanese Mafia

PxJM was a hardcore band from the mid 00's.

A 4 piece band that existed before Drop Dead, Gorgeous existed. We re-formed as PxJM.

The band before Drop Dead Gorgeous 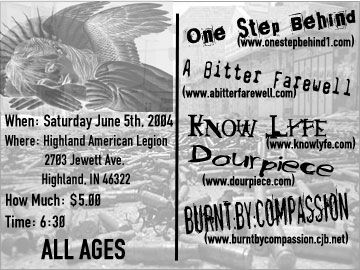 High School band that did mostly covers. We had a couple of originals though. It went through a number of different names before we landed on this one. Sprocket Rocket Underpants, Head on Collision, and others.

Video projects that my friend and I did for fun in our youth.